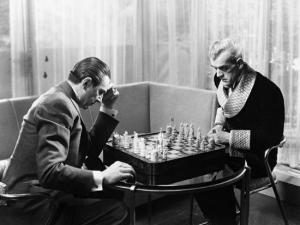 Come back every day this week for a discussion of a classic scary movie during Horror Film Week.

In the 1930s, Universal knew how to produce eerie, memorable films.

The Black Cat stars both Boris Karloff and Bela Lugosi as two old friends and rivals who meet again on a fateful night.

It is a strange film that unfolds like a nightmare, not always linear or complete, but cohesive in its way and seeming to mean something greater, although the meaning is elusive.

Maybe there is symbolism you may recognize. I won’t give away any further spoilers. The futuristic, angular sets and occult references, to me, are evocative of the German Expressionist films of the 1920s and 1930s, as is the odd but compelling pacing. According to this author, the aesthetic is Bauhaus.

The character played by Karloff was based on a real person, a notorious occultist, Aleister Crowley, a figure that fascinated the movie’s director. Crowley was known to be a chess player. I won’t say more, for fear of spoiling the surprises of the this film. I warn there are some disturbing scenes and that this is not a film for children to view.

Not everyone will like this film, although it was a box office success in its time. I accept its imperfections, mystery and originality. I own this and have watched it several times.

Maybe this is just my opinion, but I believe The Rocky Horror Picture Show was influenced by the early plot line of this movie, which they turned to camp and humor. Let me know what you think of that idea — if you see the references!

Mary Fletcher Jones is a mom, teacher, and blogger. Her blogs include Autumn in Virginia, Cool Yule Blog and You Can't Make This Stuff Up, among others. She is also the creator of "Living Well With Autism," an online resource for caregivers of children, teens, and adults with autism and related special needs.
View all posts by Mary Fletcher Jones →
This entry was posted in Frightful Films and tagged Bela Lugosi, Boris Karloff, The Black Cat. Bookmark the permalink.