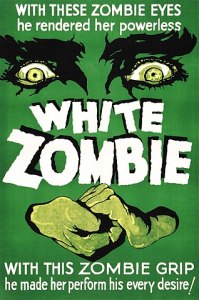 “White Zombie” is a scary classic, the first full-length zombie movie ever made. I suppose most zombie movies and TV programs owe a debt to this film for the halting, distinctive gait of the zombies presented in “White Zombie.”

The story takes place in Haiti. Starring Bela Lugosi, the movie was not well-received by critics, who said the performances by some of the actors were overly dramatic. It has the same “silent movie” style of blocking you see in the 1931 film, “Dracula.” I think that is part of its appeal, however, and it still made money at the box office when it was released.

The themes of desire, control and hypnosis are explored. It gave me nightmares for years when I was a little girl!

I apologize for the title. I feel it is offensive, and although I do not believe that was the original intent, of course, it still is. I am sharing the movie in the belief that it does not present any other negative racial sterotypes. But I could be wrong about that, and if I am, I apologize. Please let me know in this case, and I will take it down from the blog. I do not wish to offend anyone.

The movie is in the public domain, so you can watch it here or on YouTube.

Mary Fletcher Jones is a mom, teacher, and blogger. Her blogs include Autumn in Virginia, Cool Yule Blog and You Can't Make This Stuff Up, among others. She is also the creator of "Living Well With Autism," an online resource for caregivers of children, teens, and adults with autism and related special needs.
View all posts by Mary Fletcher Jones →
This entry was posted in Frightful Films and tagged Bela Lugosi, White Zombie. Bookmark the permalink.